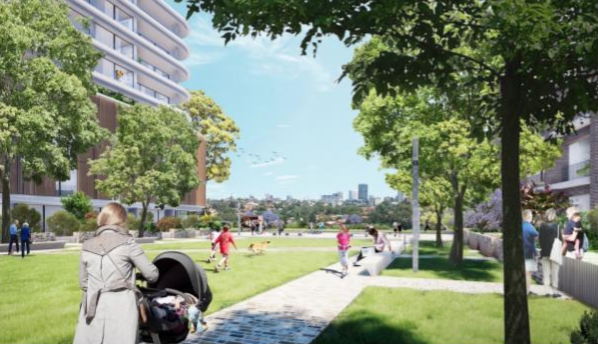 Designed by internationally acclaimed award-winning architects CHROFI, the approval includes 460 apartments across nine buildings, a series of public piazzas and extensive publicly accessible open green space creating a contemporary village-style community unlike anything seen on the lower north shore of Sydney before.

The JV partnership, consisting of Lotus Group and Euro Properties, submitted a modification to the original masterplan commissioned by the Nine Network, back in 2010.

Lotus Group’s Director of Development Damien Kiley said the joint venture partnership would like to extend sincere thanks to all parties who worked on, supported and expressed interest in the project through its truly independent process.

“The partnership is determined to deliver a vibrant and thriving new precinct for the community,” Mr Kiley said.

Euro Properties Executive Director Jeff Chan, said the ambition and vision of the joint venture team is to demonstrate design excellence through the highest design standards for the community of Willoughby which will contribute to the further enhancement of the immediate area.

“A development application for Parkside Willoughby will now be lodged for the Stage 2 detailed design with a view to commencing construction in 2021,” Mr Chan said.

The approval marks the conclusion of a thorough consultative process with the planning authorities and the local community. The IPC determination quoted “The Commission concluded the proposed modification to the development is in the public interest – finding it will deliver improved overall design and built form outcomes, more publicly-accessible open space and other similar benefits to the Project as originally approved, including the provision of affordable housing.”

Mr Kiley added the modified concept plan provides a much better conceived plan, creating greater permeability and connectivity throughout the site as well as increased green open space for the public to enjoy.

Founded by John Choi, Tai Ropiha in 2000 and later joined by Steven Fighera, CHROFI came to international acclaim following the win in an international competition for the re-design of the TKTS booth in Times Square, New York.

This was recently followed by the practice’s win of the prestigious World Architecture Festival – Civic and Community category for the Maitland Riverlink project.